By eliminating contradictions in our expression, voice, and speech, words regains their influence, and the way we think and work become more consistent 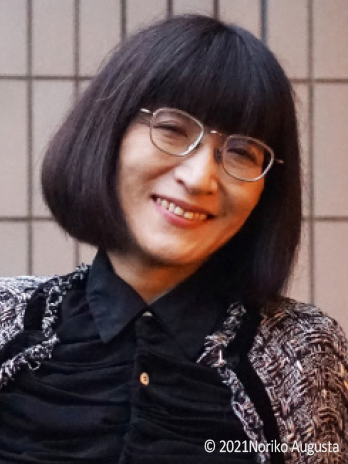 After working for the CG-ARTS (Computer Graphics Arts Society) on the planning and production of the 3D computer graphics (3DCG) certificate examination, Dr. Miyuki Ogata became a freelance editor and writer, joining Born Digital, Inc. in 2015. Since 2011, she has been teaching portfolio development and industry research at vocational schools and universities for those interested in working in the CG/image industry. From 2020, Dr. Ogata has facilitated many online events. Dr. Ogata holds a PhD from the Tokyo University of the Arts in Fine Arts from 2005. Additionally, Dr. Ogata is the author of "Making CG & Games Work” (2013) and "Portfolio Sample Book" (2011). She has co-authored "Portfolio Idea Book" (2016), "Revised Edition of Digital Image Expression" (2015), and "Human Anatomy for CG Creators" (2002). In 2020, Dr. Ogata received the 19th Arts Contribution Award from the Society of Art Science.

I experienced the passing of my partner at 36, three years into my independent freelance career. I have been working vigorously ever since. In the process, I achieved a measure of independence both financially and mentally. Yet I was dismayed by my exhausted reflection in the mirror, and at 42, I began receiving fashion consulting. As a result, by improving the quality of the clothes I wore, I began to think that I wanted to refine my appearance, body language, thoughts, and way of working to a level that would beautifully harmonize with my new style. However, finding an environment where I can receive the appropriate guidance I need is no easy feat past the age of 40. I finally decided to enroll in the Dale Carnegie Course after remembering I had once attended a free preview session.

Perhaps due to the influence of books such as "Hito wa mitame ga kyu wari (English translation: Outward Appearance Makes up 90% of the Person)" (Ichiro Takeuchi, Shinchosha, 2005), some people say that "what is being said only has 7% of influence capability” Since I am in the business of communicating information through words, I have always felt disappointed whenever I heard this theory. But during the course, one of the trainers said, "if there are inconsistencies in the three elements consisting of (1) facial expression, (2) the tone, volume, and speed of the voice, and (3) the content, the persuasiveness of the words will be significantly reduced. He further explained, “by eliminating contradictions, words regain their original impact," which cleared my uncertainty and I became more committed to mastering the "kata" (methodology) that would allow me to eliminate contradictions. At an online event I facilitated during the course, my MC work was well-received by the audience and clients, and I was given the opportunity to take on a larger task.

In this course, you will learn Dale Carnegie’s human relationship principles from “How to Win Friends and Influence People” and stress management principles from “How to Stop Worrying and Start Living.” The principles were proposed by Dale Carnegie (1888-1955) and is one standard “kata,” or methodology. By knowing, practicing, understanding, and refining the techniques and habits of this "kata," we aim to achieve our own goals. I still have a ways to go, but having learned the "kata", I am now able to better evaluate the impact and quality of my communication and presentations. I now have a better idea of how to improve myself, and sometimes I even have time to think about breaking the "kata". I learned from the two trainers, who have completely different qualities, that the "kata" is just a "kata" and how to utilize it is up to the individual.

The principles advocated by Dale Carnegie are written in the books “How to Win Friends and Influence People” and “How to Stop Worrying and Start Living,” and can be learned without taking this course. In fact, I had read the books before attending the course. However, it is not easy to apply all the principles into practice, and it takes dedication to make it a habit. The value of this course lies in being able to see the trainers embody the principles and receiving their encouragement. There is also great value in discussing and receiving inspiration from other participants in the course. Even if the principles are the same, there are different ways of interpreting and applying them, and some people are a step or two ahead of others. As we are surprised at the transformation of others, feel impatient at our own lack of it, we become even more motivated to aim higher. This desire makes our words, thoughts and actions consistent without any contradictions.

What is the Dale Carnegie Course?

The Dale Carnegie Course is based on the 30 Human Relations Principles developed by Dale Carnegie, known for his bestselling books "How To Win Friends and Influence People" and "How To Stop Worrying And Start Living," based on many years of experience, and is centered on the Five Drivers (Building Confidence, People Skills, Communication Skills, Leadership Skills, Stress Management) necessary to achieve success in life.

If you want to learn how to speak effectively, strengthen your interpersonal skills, manage stress, and cope with a rapidly changing work environment, the Dale Carnegie Course is the answer to all your challenges. The course can be taken either face-to-face in the classroom or online (we call it LIVE On Line).

Breaking free from being an educated bystander. Supporting Japanese women in action to bring change and innovation to Japanese society

One of the world's most prominent business leader, Warren Buffett, is also a graduate

Think and act based on your own opinions. Be the change agent! Supporting the development of the next generation of female leaders as a lifework